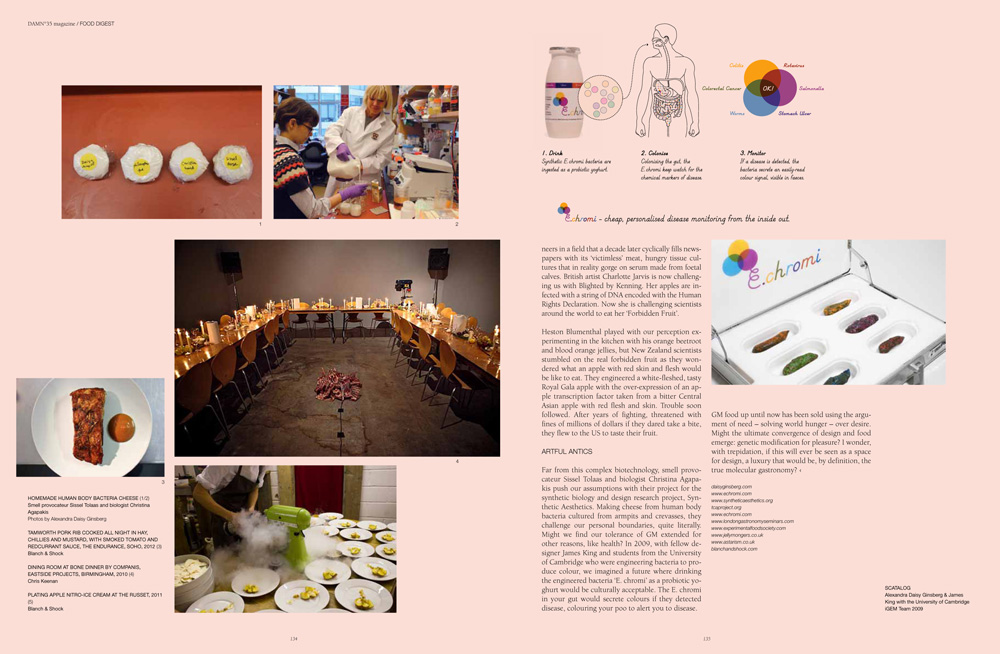 Pondering the evolution from sliced bread to tomatoes containing antifreeze genes to the  ultimate in processed foods, we take a good hard look at what is actually going on in the food industry these days. In this rapidly advancing field of play, science and engineering are taking on serious roles behind-the-scenes while design is garnering attention at the front-end. It is no longer about sustenance, but about effect or efficiency or simply appearance. With molecular biology having been given a good run by chefs proper, the artists and designers are now moving in, keen to redefine our experience of food.

With the Olympics but a distant memory, one nugget remains indigestible: the unusual breakfasting habits of athletes splashed about in the morning newspapers. The ‘special sauce’ that gives our super humans the boost they need ranges from the seemingly natural and low-tech colostrum, the disgusting-tasting, foul-smelling, nutrition-packed first milk a cow produces after giving birth, to the truly nature-free, factory-made carbohydrate gel, perhaps the ultimate processed foodstuff (and one with all the pleasure seemingly engineered out of it).

Was your breakfast something more wholesome—a cup of coffee, a bowl of cereal or a plate of fruit? While we are increasingly vocal in rejecting the ‘processed’, celebrating what we perceive as natural, slow foods, none of these breakfasts are a stranger to science and technology. Even growing your own food or making your own bread is unlikely to exempt you from the reaches of human design. The staples we dine on often look foreign to their wild relatives. Tomatoes are swollen fruits compared to their feral ancestors, wild broccoli is an oxymoron, the cow that gave its colostrum up for the weightlifter’s breakfast is an altered beast from its forebears, tweaked and iterated according to human desires.

2012 marked the 84th anniversary of the invention of sliced bread, a hard-won battle of acceptance back in the day. It is not just the sharp teeth of Rohwedder’s industrial slicer that disturbs the integrity we like to imagine in the food we eat. Every component of that sliced loaf has become subject to the scrutiny of engineering design. From the industrialised agriculture that provides the wheat (bred over millennia to meet human needs, now patented) to the anonymously numbered chemicals that fluff, flavour or preserve it, to the robotic knuckles that knead it. Sliced white bread is a symbol of modern food bettered through design, protected from spoiling, convenient, and visually luxurious in its pillowy whiteness. It is one moment in our history of the science and engineering of our food; from the milk first preserved as cheese, to salting, canning, and freezing of today’s meat-free meats, seedless watermelons, and tomatoes with fish antifreeze genes locked inside. The design of food and food’s departure from the natural is a fact in what we eat today.

While foodstuffs themselves may long have been designed, it has not often been done by designers. Food may be—to our distaste—increasingly synthetic, but we were still excited when molecular gastronomy’s superstars Hervé This, Ferran Adria, or Heston Blumenthal first invited us to reconsider our prejudices to intervention, subjecting food to the extremes of scientific experimentation. Molecular gastronomy is said to be waning, but these chefs’ technological focus on food has enticed a new group of designers, building on the work of those who had been challenging our experience of food. These hi-tech chefs, some with a background in design and art, are converging on food, design and science and technology. They design ingredients and cooking processes, engage in biochemical research, experiment with food as a design material, seek out hi-tech tools, play with performance and visual pleasure, and even research the social implications surrounding new foods.

OUT OF THIS WORLD

In the UK, various avant-garde food technologists, designers and chefs have clubbed together to form the Experimental Food Society, many of whom are defining new modes of practice. Amongst its members are the Jellymongers, Bompas and Parr, who started their collaboration in 2007. Harry Parr— with a background in architecture—and schoolfriend Sam Bompas have built a discipline around high-performance jelly. Using rapid-prototyped jelly moulds, they have stretched the limits of gelatin, with clients ranging from KitchenAid to Unilever and Sony. Occasional collaborator Andrew Stellitano transforms food into a design material, using tools more familiar to the workshop or studio, laser-cutting pasta or printing on food. Meanwhile, Blanch & Shock are a food design studio inventing a practice beyond catering. The food may well be utterly delicious, but they are also engaged in research. Another member, Rachel Edwards-Stuart, a food scientist whose PhD was sponsored by Heston Blumenthal, co-founded the London Gastronomy Seminars, inviting audiences of food-lovers, designers, and others to further investigate the technology of food.

Older hands have dabbled in the realm of food and high-tech before. In 2005, the European Space Agency, concerned about the limited shopping list for future astronauts growing their food in polytunnels on Mars, commissioned French celebrity chef Alain Ducasse to develop meals from a limited palette of rice, onions, tomatoes, soya, potatoes, lettuce, spinach, wheat and spirulina. The Ducasse offering looks more like nouvelle cuisine than a meal to satisfy the hunger after a hard day of terraforming the red planet. But the challenge of space food is not just in getting greenhouses to Mars. NASA’s synthetic biologists want to genetically engineer new foods to sustain long missions. Nutrition over pleasure perhaps, but might these protein futures hint at the future design of genuinely novel foodstuffs?

Genetic modification (GM) is nothing new in food. But as our ability to design DNA becomes more sophisticated, will the boundaries of consumer designed foods shift? Luther Burbank was a celebrated horticulturist in early 20th century America, designing new kinds of fruits and vegetables. Will future designers follow him? GM remains an uncomfortable and complicated space: in the USA it is nearly impossible to avoid food laced with GM corn fructose or soy extracts, whereas Europe is sceptical, concerned, perhaps rightly, with issues ranging from corporate monopolies and loss of farmers’ freedom, to environmental issues of cross-contamination. Artists have long prodded the boundaries and challenged assumptions over food. In 1930 Marinetti’s Manifesto of Futurist Cooking introduced scientific equipment and, with it, modernity, into the kitchen. In 2003, Tissue Culture & Art grew and ate the first Semi-Living Steak, a tiny frog patty grown from frog cells. With Disembodied Cuisine, the artists were pioneers in a field that a decade later cyclically fills newspapers with its ‘victimless’ meat, hungry tissue cultures that in reality gorge on serum made from foetal calves. British artist Charlotte Jarvis is now challenging us with Blighted by Kenning. Her apples are infected with a string of DNA encoded with the Human Rights Declaration. Now she is challenging scientists around the world to eat her ‘Forbidden Fruit’.

Heston Blumenthal played with our perception experimenting in the kitchen with his orange beetroot and blood orange jellies, but New Zealand scientists stumbled on the real forbidden fruit as they wondered what an apple with red skin and flesh would be like to eat. They engineered a white-fleshed, tasty Royal Gala apple with the over-expression of an apple transcription factor taken from a bitter Central Asian apple with red flesh and skin. Trouble soon followed. After years of fighting, threatened with fines of millions of dollars if they dared take a bite, they flew to the US to taste their fruit.

Far from this complex biotechnology, smell provocateur Sissel Tolaas and biologist Christina Agapakis push our assumptions with their project for the synthetic biology and design research project, Synthetic Aesthetics. Making cheese from human body bacteria cultured from armpits and crevasses, they challenge our personal boundaries, quite literally. Might we find our tolerance of GM extended for other reasons, like health? In 2009, with fellow designer James King and students from the University of Cambridge who were engineering bacteria to produce colour, we imagined a future where drinking the engineered bacteria ‘E. chromi’ as a probiotic yoghurt would be culturally acceptable. The E. chromi in your gut would secrete colours if they detected disease, colouring your poo to alert you to disease.

GM food up until now has been sold using the argument of need—solving world hunger—over desire. Might the ultimate convergence of design and food emerge: genetic modification for pleasure? I wonder, with trepidation, if this will ever be seen as a space for design, a luxury that would be, by definition, the true molecular gastronomy?

Reproduced with permission of DAMn Magazine.