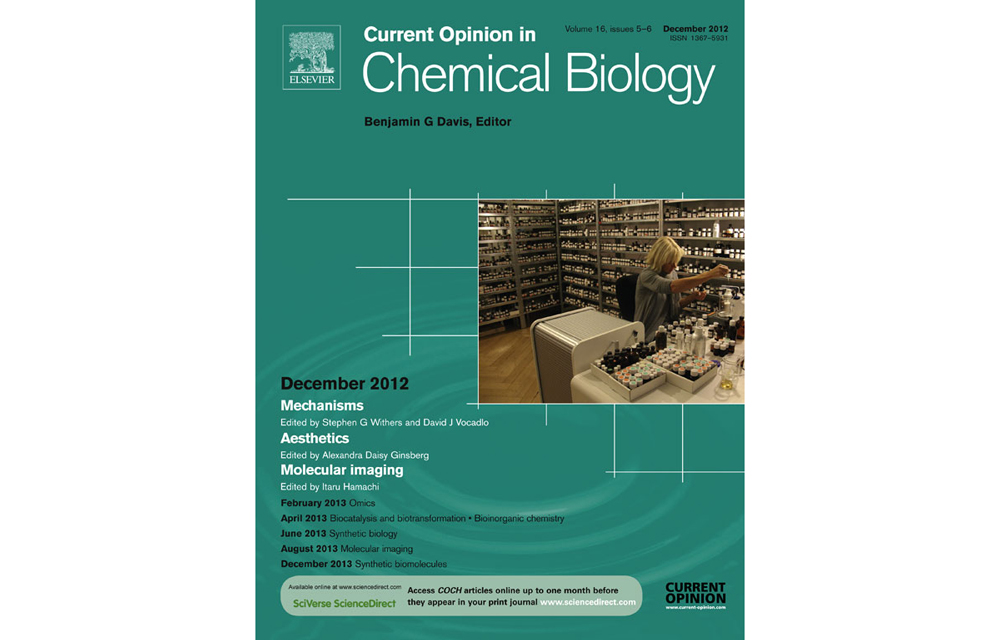 “The twentieth century abstract expressionist painter (and keen ornithologist) Barnett Newman was famously scathing about professional aestheticians, quipping, ‘‘Aesthetics is for me like ornithology must be for the birds.’’ For Newman, the artist does not need knowledge of aesthetic theory to do their work; but what they do is without doubt tangled up in aesthetic experience. Most chemical biologists would probably agree that this remark applies to their work, to an even greater extent: aesthetic theory and the everyday practice of science appear to be worlds apart.” (Excerpt from Editorial Overview, Alexandra Daisy Ginsberg)

I was invited to guest edit the December 2012 special issue of Current Opinion in Chemical Biology, on the theme of aesthetics. This highly unusual experiment—tasking a designer/artist with inviting and editing scientific papers, on the theme of aesthetics, for a purely scientific audience—challenged any notion of C.P.Snow’s so-called Two Cultures.

Much of our science and technology relies on the visualization of complex data, and chemical biology, more than most fields, often deals with complex datasets. There are, however, other ways of making information available to our senses beyond the visual. Rare individuals naturally have sensory crossover, whose synesthesia permits them, for example, to see colors or shapes when hearing sounds or to sense a specific taste with a specific word. Many scientists, technologists and inventors, however, make a conscious attempt to convert one type of sensory-like input to a different sensory output. A laser light show, for example, converts sound to sight; infrared imaging converts heat to sight. Two recent examples of such intentional synesthesia are discussed in this context: sight-tasting and smell-seeing.

Recent research informing and related to the study of three-dimensional scientific models is assembled here in a way that explores an aesthetic, specifically, of touch. I concentrate on the materiality of models, drawing on insights from the history and philosophy of science, design and metaphysics. This article chronicles the ways in which touch, or material interactions, operate in the world of 3D models, and its role in what models mean and do. I end with a call for greater attention to scientific process, described as assembly of and within science, which is revealed by this focus on touch.

Smell is perhaps the most subjective of the human senses, making odors difficult to measure and define. In everyday language, in the philosophy of aesthetics, and in the lab, this low opinion of odors means that smells are often characterized simply along an axis of good or bad. Odors and the ways they are perceived, however, are varied and incredibly complex, requiring an understanding of chemistry, neuroscience, aesthetics, and social science. Science and art that engage the sense of smell have the potential to expand our understanding of how biology and chemistry interact.


Aesthetics in Synthesis and Synthetic Biology
Steven A Benner

Physicists frequently allow aesthetics to guide their science. Chemists sometimes do. Biologists rarely do. They have encountered too frequently the consequences of the Darwinian ‘hack’. The biological parts delivered by Darwinian processes are rarely simple, efficient, or elegant solutions to the biological problems that they address. Nevertheless, as humans, we seek to find aesthetics within our activities. In general, however, it is hard to distinguish what we say is beautiful from what is, in reality, utilitarian.

Synthetic biologists typically construct new pathways within existing cells. While useful, this approach in many ways ignores the undefined but necessary components of life. A growing number of laboratories have begun to try to remove some of the mysteries of cellular life by building life-like systems from non-living component parts. Some of these attempts rely on purely chemical and physical forces alone without the aid of biological molecules, while others try to build artificial cells from the parts of life, such as nucleic acids, proteins, and lipids. Both bottom-up strategies suffer from the complication of trying to build something that remains undefined. The result has been the development of research programs that try to build systems that mimic in some way recognized living systems. Since it is difficult to quantify the mimicry of life, success often times is evaluated with a degree of subjectivity. Herein we highlight recent advances in mimicking the organization and behavior of cellular life from the bottom-up.


See Current Opinion in Chemical Biology for full texts.
With thanks to Professor Ben Davis, University of Oxford.