This article appeared in the RSA Journal, Winter 2011. 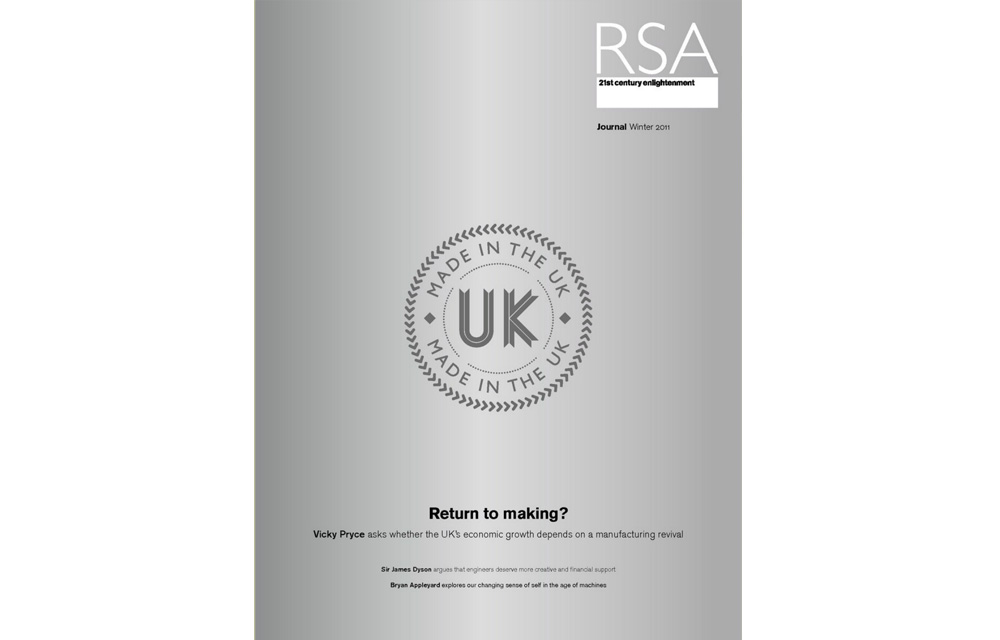 Synthetic biology has the potential to transform the manufacturing sector, but it requires a new way of thinking about the relationship between design and science, between nature and industry, and even between creator and product.

Design is the transmission of ideas through things. But how do we judge whether new ideas are good things if the designs become invisible? Since the industrial revolution, design has been integral to the process of making things. It translates technology into the mass of useful stuff that marks progress in our everyday lives: the internal combustion engine into the car; the spring into the adjustable lamp; the transistor into the personal computer. Design separates what we make from what already exists: the natural, living stuff we want to control. But design is a plastic term with plastic morals. While we enjoy the conviction that 'to design is to be human', design today is mostly concerned with making products for us to consume, shy of responsibility for the functions to which it gives form and those forms' existence before and beyond their functional lives.

But now the mosquito is becoming a design object. Oxitec's RIDL male mosquitoes progeny die by genetic design. Grown in a factory, sorted by sex and released by the million, they mate with wild female mosquitoes to produce faulty offspring that will never hatch. It is a polite, British design solution to the tricky business of eradicating pathogens, on a geo-engineering scale. Swiss-designed bull sperm are also being trialled, encapsulated in cellulose before being inserted into a cow's uterus, unpackaged at ovulation as her hormones trigger precision-timed conception. Fewer deaths from dengue fever and cheaper dairy products may be the consumer's only experience of these designs. This is death and life as the stuff of design.

These experiments are some of the first non-microbial products of synthetic biology, a refreshed ideology for genetic engineering as scientists and engineers attempt to standardise biology into a material for the manufacture of systems and materials that have not (yet) evolved naturally. Synthetic biology is a multidisciplinary endeavour, involving engineers, biologists, computer scientists and biochemists. Its pioneers see themselves as designers whose objective is to turn DNA into biological parts that can be ‘black-boxed’ into circuits and systems that become the design focus of a biotech revolution.

While industry has used E. coli to produce insulin commercially since the 1970s, synthetic biology's toolbox can help redesign bacteria more effectively, so that it secretes rubber for tyres, ingredients for cosmetics and drugs, or fuel for cars. Molecular blueprints engineered at the scale of genetic circuits, invisible to the naked eye, are manufactured inside modified organisms.

If this approach proves successful, the way we design, build and manufacture materials may shift from synthetic chemistry to biology. The transition could be imperceptible for consumers, with invisible living machines hidden in vats, evident only in the new infrastructure they demand: vast sugarcane plantations colonising distant places to supply food for the microbes. More visible projects, such as high-tech crops or bioremediating bacteria that digest catastrophic oil spills, need not materialise. With our predisposition to nimbyism and squeamishness towards genetic modification, what could be better than a disruptive technology that does not disrupt our lives?

Synthetic biology has attracted the interest of social scientists, bioethicists, and policy and risk experts, all of whom have been examining its potential promise and perils. The questioning has tended to focus on the same concerns: bioerror (the right technology going wrong), bioterror (the wrong people using the right technology) and ownership (the technology getting lost in ‘IP thickets’ or becoming subject to monopoly). After deliberation, Obama’s Bioethics Commission announced in December 2010 that synthetic biology is no different in terms of risk and reward than previous technologies. We may proceed, but with caution. Funders are certainly convinced, from fuel (Exxon has invested $600m) to defence (the Defence Advanced Research Projects Agency invested $30m in 2011).

Progress in design and technology is a route towards an imagined perfection, assuming movement in one direction: forward. Progress and evolution are not the same. Evolution responds to context, rather than the guaranteed process of improvement. Synthetic biology is not the iteration of nature for our progress—the selective breeding of plants or animals—or simply a manufacturing revolution powered by biotech. It is a change in the nature of the things we consume. Autocidal mosquitoes, automated bull sperm and rubber-producing microbes are prototypes for 21st century design, an evolution from the existing design artifice.

Living machines, as much as we impose our design on them, are subjects of evolution, not progress. We may be able to design with biology, but the designs are not fixed. This conflicts with engineering’s dogma of control and may force us to redesign the boundary between what we make and what we are. While synthetic biology promises to build a better future, we should be wary of presuming that there is a sole definition of ‘better’ or that we can maintain the separation between us and our designs.

How will we judge good design from bad? How do we deal with the strategies design has evolved to define its role in consumerism: obsolescence, form, style, uniformity, function and utility? Things that design has, until now, ignored, such as product lifecycles and disposal, become vital. Even if synthetic biology is subsumed into other fields, one thing remains certain: our current language of design lacks the tools to help us imagine the unknown. So how do we develop a design discourse for speculation on the cultural function of biological objects?

In 2009, I went to see Cambridge University plant scientist Jim Haseloff, who is researching plant growth. He suggested that, one day, we might grow products inside plants. Can we program and control plants to solve our unsustainable consumption patterns? Can we turn living organisms into industrial robots, replacing today’s mechanical production lines?

Working with fellow artist Sascha Pohflepp, we designed an imaginary commodity to help us investigate—not predict—this potential future. Growth Assembly is a product grown in seven different parts, with the components harvested and assembled to construct a herbicide sprayer. We saw this as an essential consumer product, used to protect the delicate, engineered horticultural machines. We would introduce diversity and softness into a realm that is currently dominated by hardness and heavy manufacturing standards. Shops would evolve into factory farms; licensed products would be grown close to where they are sold. Products would no longer need to be shipped around the world: only seeds would be transported, since their DNA would contain all the manufacturing instructions.

The technology we pictured appears seductive, but it is also troubling. In our vision, industry subsumes nature entirely, with human design strategies replacing nature’s elegance. Seven designed plants do what evolution ‘designs’ without intention.

Many more artists, scientists and designers are beginning to explore the implications of this new kingdom of living products. These interdisciplinary collaborations are challenging assumptions, introducing a critical language into the biological design process and encouraging speculative research that is free from the usual lab constraints.

Form may follow function, but we can still decide which functions we want. In opening up a space for design to examine ideas outside its commercial remit, we can help it rediscover its role as a transmitter of ideas through things. And in thinking through things, we have a better chance of achieving progress.